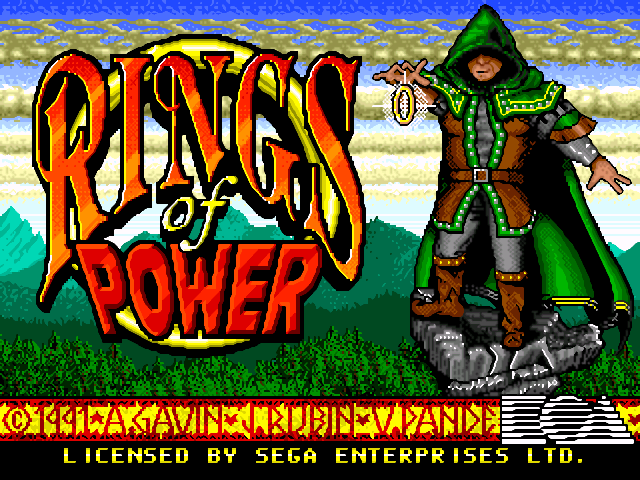 Looking at the title and accompanying screen, one may think that this is a Tolkien game, what with the stubby-legged hobbit there and all.  But no, Rings of Power is an entity all unto itself, though it does follow many of the tropes all ready established at that point.  The god Nexus created everything with the help from his Rod of Creation and it was good.  Then the god Void came along, stole the Rod, and took a big dump on everything, causing a cataclysm that lasted a whole 66 years.  Nexus, who was doing lord knows what during those 66 years, eventually battled with Void in a pay-per-view of such epic proportions that it shattered the Rod in half.  Each took one of the halves and split it even further to prevent the other from ever reassembling this ultimate artifact.  Five hundred years later and the segments of power are nothing but a legend to most — but not young Buc.  He's a bright lad who probably should have been named Shen but wasn't.  Buc is a young Sorcerer, devoted to the powers of the mind and one of the six schools of magic that almost everyone belongs to.  From the vaunted high priests to the lowly serving wenches, all have at least some spell casting capability.  It's so common, in fact, that most people don't even use weapons or armour, Buc being one of them.  Buc's master, Thalmus, also believes in the legend and has tasked Buc with leading a party, with each member representing one of the schools, and finding said rings.  Anatomy-minded readers may have already picked up on the tone of the game based off the name of Buc's master, but here's some more evidence, keeping in mind that this is the very first thing that Buc comes across.


Talking with individuals gives more options than the standard one-liner, with Buc being able to inquire about jobs, class, the local city, and his quest.  Most people will go on at great length on any particular subject.  Unfortunately, 95% of the dialogue is shared between all inhabitants of the same city or class, with some professions bantering exactly the same no matter where in the world Buc is.


After doing a minor fetch quest for Thalmus, the students are all gathered for a final briefing, when all of a sudden one of the students assassinates Thalmus, no doubt an agent of Void.  During his death throes, Thalmus teleports each student to a different part of the world.  Buc ends up near the city of Division and is almost immediately accosted by some beggars.  Giving them 50 golds treats Buc to a bunch of ramblings from an obvious madman.


Beyond this, crazy dude also lamblasts censorship while ironically censoring himself and also complains about having to reprogram the blitter code and buc1.bc file.  The developers are obviously having a bit of fun here but it really alters the tone of the game, and not in a way I particularly like.  I can only hope that this guy is the exception and not the norm.  After the chat, Buc enters Division and proceeds to explore a little bit.  He takes a break near the docks to write some stuff down and all of a sudden — BOOM! — bear attack.  Bears can cast the claw spell, which functions exactly the same as any creature swiping with a pointy paw.  Buc can counter with his ranged Stun spell, which thankfully does a little more damage.  Combat is mostly automatic with an option to be fully automated; I can choose Buc's spell and mood (four different ranks of aggression).  Tactical movement is always handled by the AI, which consists of a lot of shuffling and moonwalking about while occasionally attacking.  I'm not sure I understand the point of the movement system, as it takes place on a complete flat field with no terrain or obstacles of any kind.


If Buc spends one of his phases retreating, the opponent will just spend one of its phases to close the gap.  Perhaps with a full party the AI will develop a front rank and attempt flanking maneuvers, but I'm assuming that things like flanking aren't even considered and that full party combats will just be a clusterfuck free-for-all (I have no faith in artificial intelligences that aren't spelt S-H-E-N).  So combat at this point is funny to watch everyone getting down with their bad selves, but is otherwise completely unenjoyable.  At any rate, hanging outside in town is obviously not safe like I thought it would be, so it's best the Buc get off these docks and — BOOM! — two bears attack!  Damn, is the circus in town or what?  Why are these docks so infested with bears?  Well, Buc knows that discretion is the better part of valour and decides to flee to the nearest dwelling.  He meets with Hack, who will allow a knight named Slash to join him if he does some fetching and a fight first.  Being a knight, Slash does have a weapon but needs to cast a spell in order to use it.  With no real leads about any of the rings, Buc and Slash head south to the city of Blood, where the necromancers play.  Buc figures that it'll be another quick fetch n' slay and then he'll add a necro to his ranks, but he is woefully wrong.  He is suppose to take a corpse to a grave site somewhere on a hill south of Blood and is even given coordinates to the exact location.  Problem is, Buc doesn't have a sextant, though he does know one is located in a cave behind a waterfall west of the city of Cathedral.  But he doesn't know where Cathedral is.  So Buc packs up the corpse and heads off into the world to try to find the apparently rare sextant.


Since the journey could be a long one, Buc breaks out the map he received at the start of his quest.  And what a map it is!  An accurate tile-by-tile representation of the entire world, though lacking any annotations such as city names.  I spent the better part of fifteen minutes just randomly scanning for locations that I think Buc might enjoy hitting up some day.


It's pretty early in the game but I'm going to put all my chips on the table and say that this map is the best part of the entire game.  It's huge and — and this is the important part — completely open to explore.  Purchasing a ship isn't prohibitively expensive; the biggest concern is the purchase of food and water.  Yes, Rings of Power isn't happy with just a food clock, it also adds a separate water one as well.  Travelling through different terrains depletes each clock differently, roads being the cheapest.  Preparation and planning is required before heading out of any city.  God, it's so nice to have a non-linear world to explore.  Quests are also completely non-linear and multi-layered, requiring a lot of note taking, which I do not mind in the slightest.  There's also a world economy of sorts; each city specializes in production of a product while giving a high price to a certain other product.  There's going to be a lot of backtracking I'm sure, so I've been keeping a log of all the best deals, just in case I run into a cash crunch. I've found five cities so far (including Cathedral), no new party members, seven sextant locations, and have about four pages of notes.  Combat continues to suck the big one though, with encounters that end in Buc and Slash's deaths before they even get a chance to adapt being thrust into the cosmos.


Buc is close to getting the sextant (I hope), so that this party can really get started.  First priority is getting some party members to help prevent all the deaths.  Ideally, I'd like to get a full party before searching in earnest for rings, but I'll play it by ear, exhausting any leads in an area before heading back to follow up on any previous ones.
Uploaded by Shen Nung at 09:39