I've been a little vague on the storyline but that's because it's not particularly interesting.  I've been gathering gems to battle the evil Kalvary.  King Predator pictured above was suppose to be on my side but then betrayed me and stole the gems.  It was no biggie though cuz I just chased him down and got 'em back (only to lose them again later).  The next big hurdle was tackling three fortresses via tactical battles.  The first two were easy enough but the third was much harder, but this was due to my troops being depleted with no simple way of regaining their strength.  Since there is no army management screen, a unit's damage remains the same and one cannot replace them by purchasing a fresh one (damn unions!).  So what I ended up having to do was sacrifice off any weak units, surrender (losing half my money), and grind enough cash to replace the army.


Another reason to replace the old guard was that there were new unit types available, namely motorcycle gangs, ATV enthusiasts, and catapults.


At some point, I picked up another character from a town, a bird-looking creature named Piper who said that he's good at finding things (no splash pic for him either).  I devoted a good amount of experience his way, getting him up to level 10.  Even though Etern was a higher level, Piper outclassed him in attack power, despite them using the same weapon.  For whatever reason, when Etern was upgraded to strongest non-unique weapon available, his attack power did not increase.  Did I call it or what?  What a wuss.  I did not use Etern in any more battles after discovering this.  The rest of us battled our way through a castle and gained the last part necessary to build a hang glider, which would allow us to fly back home, which was apparently being destroyed by Kalvary.


At the appropriate sending point, Peter and I constructed the glider, which was super-duper tough as it had to hold all six of us, including our motorcycles.  Soon we were on our way back over the chasm that separated my hometown from the mainland.


We met with the same sage who gave me a tablet near the beginning of the game and he told of us a secret passage that would take us back to where we just were before riding the glider.  Only now we could get on a boat that would take us to Kalvary.  En route, our tub gets rocked by a huge wave and the party takes some losses.


After we reach our port of call, I take a tally on the party and find that only Pete and I remain, which raises the question — what the fuck was the point of the other characters?  After the first three join, why bother having others to select from?  Other than Etern, they are all statistically similar and nobody has any special abilities.  Whatever, as long as Peter survived cause he's mah boi (and he's the only other one I gave powerful unique equipment to).  Well, nothing left to do but take on Kalvary by ourselves.


Our assault on Kalvary goes terribly as neither of us can hit him at all, due to the power of the gems.  He doesn't do much damage so we very slowly eventually die.  After our resurrection, the sage tells us that the tablet holds the words to seal the power of the gems.  This would have been good information for him to pass onto me at any point in the game.  But fine, whatever, let's walk through that maze of a castle yet again and take Kalvary on for reals.


The battle is long as Kalvary has a lot of HP but hits us for very little.  It's a pure melee slugfest and thank fuck for turbo speed because I think I would have gone into sleep mode otherwise.


The credits roll and I'm told that "the barbarian lord Shen has saved civilization", which is an odd thing for a barbarian to do.  But I'm an odd duck (or so I've been told), so I suppose I'll be happy with this short n' sweet ending to this short n' bitter game. 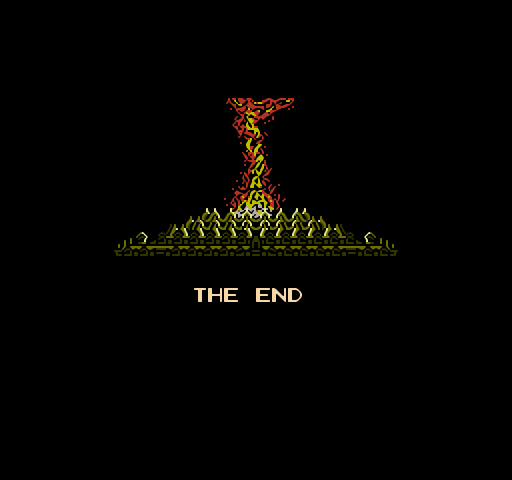