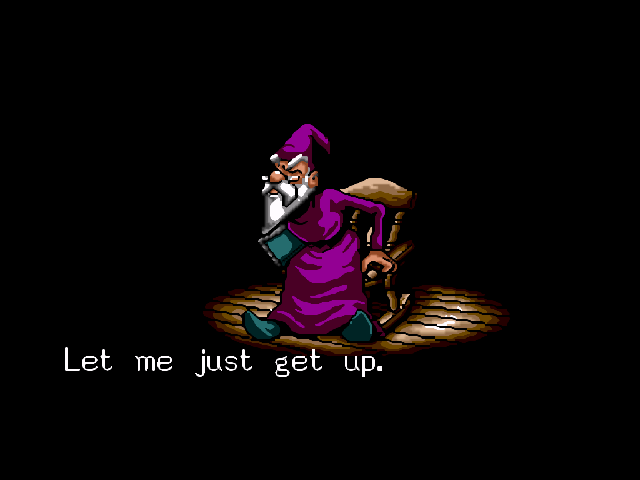 Yes!  Yes!  Finally, a non-translated, non-JRPG for poor me to endure.  I've never played Shining in the Darkness before, although I have played its successors, Shining Force 1 and 2.  Those games are quite a bit different from SitD, being closer to a strategy RPG, like Fire Emblem or Final Fantasy Tactics.  The inaugural entry in the Shining series, however, is a straight-up dungeon crawler, which means (squeee!) breaking out the graph paper and mechanical pencil.  I knew I was in for something different when the game decided to not have a title screen at all.  I had to screencap something though, so you get an old man letting one rip instead.  The plot is nothing to write home about — kidnapped princess, kingdom in peril due to foozle, only this small band of plucky, young adventurers can possibly save us all, etc.  I do like the antagonist, Dark Sol, here as he's not content to just sit at the end of the game, waiting to be revealed when the party gets around to destroying him at the peak of their power.  No, D.S. gets all up into the king's grill, appearing in the throne room, bragging about his princess-kidnapping prowess, and then buggering off before anybody has the foresight to start drawing their weapons.  I was immediately enlisted to start investigating the whereabouts of said princess, but where to start?  Well, luckily the king himself had already done a deep and thorough reconnaissance and he shared with me the results of his intel.


Well, I don't need a whole lot of convincing to get my ass into a gridded dungeon, so I headed into the nearby town to get some equipment and provisions and maybe stop by the tavern for a little drinkie-poo.  The tavern was bumpin' and I heard some stuff about some friends I guess I have that I'm sure to meet up with later.  I also had to put up with some passive insults from some of the more surly denizens of the bar, but don't you worry, I made sure that they checked their privilege by the end of the conversation.


Tired of being oppressed by the poletriarchy, I sauntered over to the weapon shop to start gearing up for the quest.  I was completely surprised to find that the shop was run by none other than the dwarf from the Golden Axe arcade game!  He's even got a smiling portrait of one of the gnomes that he kicks the crap out of for potions, which raises all kinds of questions.


Anyway, after getting my EQ settled, it was back to the palace to get the key to the labyrinth.  Time was of the essence, as who knows what the princess might be enduring right now, as we speak!  I burst into the throne room and announced my readiness to the minister in charge of the investigation but apparently that breached protocol and I was supposed to talk to the moron king first.


Then the king — this fucking king, I tell ya — immediately just passed it over to the minister anyway.


Well, someone needed to take charge, so I grabbed the key and headed next-door to get this show on the road.


Aahhh!  I eased back into dungeon crawling as smoothly as an old man lowering himself into a nice, hot bath.  Soon I was up to my knees in monster entrails and lovin' every minute of it.  No denizen of the maze was spared my wrath as I sliced and diced my way into some needed loot and levels.


Eventually I had to head back to town, if only to wipe the obscene amounts of gore off of me.  Of course, I was also going to frequent the tavern for a little top me up and it was here that I met the first of my friends, the sorcerous super-bitch Pyra.  She was laying into the barkeep big time over who knows what and then, when she saw me, she immediately started ragging out on me too.


On the way out of the tavern, Pyra bumped into a lizardman warrior named Gila and then, he too, was subjected to a tremendous tongue-lashing, blaming him for what was clearly her fault.  He handled the situation very smoothly; I'll give him credit for not drawing his sword on her.  Gila excused himself and informed us that he was just on his way to the labyrinth and was in a rush.  As he walked away from us, Pyra then decided to cast a slow spell on him to help increase his chances of being murdered.  Damn, that be cold.


We then headed to the temple to pick up our little dweeby cleric bud, Milo, who doesn't get a screenshot apparently.  Sorry, Milo, but maybe you should have tried killing at least a few of your fellow citizens before leaving town.  At any rate, now with a full party and plenty of healing magic, the dungeon was ready for maximal exploration and murder.  Monster group sizes increased dramatically, having upwards of six participants in a single battle, but even so, most fights were easily dealt with.  The only close battles were the ones where the monsters decided to focus on the weakly armoured Pyra, but Milo usually managed to bust off a heal before she perished.  This happened a few times and soon both Milo and I were getting earfuls about how we're not protecting her enough, and we're taking too long killing the monsters, and why did I forget her birthday four years ago.  In order to get it to stop, I decided to purchase some new armour for her and entered the menu screen to equip her new gear.  SitD's equipment screen has cute icons for every slot on a character, including when there is nothing equipped at all.  Even better, each character has their own personal "empty" slot, like the head slot which shows each character's hair style.  At first, I thought it was just the head slot that had a unique icon, but learnt I was wrong after removing Pyra's default robe and being treated to an icon of the perfect woman.


Padding Pyra up helped a lot in keeping her complaints down and we were back on track to continue the delve.  Things were going swimmingly until we ran into our old friend, Gila.  He'd been getting his ass handed to him FOR SOME REASON and now needed our help to get back to the town.


Gila was a bro though, occasionally getting in a hit from the back ranks for some bonus damage, but he left as soon as we hit the town.  I was waiting for Pyra to do something to him, but she's actually been pretty quiet lately.  Maybe all she needed was some new clothes to get her to shut up, but if I know women (and I don't), the novelty will soon be wearing off and Milo and I will be back up to our armpits in belittlements and denigrations.  Our only hope is to grind out some coin and make sure we have enough to upgrade her armour when she starts getting crusty again.
Uploaded by Shen Nung at 21:16