Damn these damn quests interfering with my bidness.  It doesn't even make any fucking sense.  First, I trade over land because trading via ship costs not only money but also missed opportunities for the slaves to get a workout as the high seas have no encounters.  Second, and this is really the major point here, what the fuck does it matter to this asshole supplier if there are pirates around?  I'm the one assuming the risk of being attacked — it kinda defines my profession.  At any rate, I decided I might as well do all the quests in the area at once and get them out of the way, which surely meant another princessly problem to deal with.


However, in a fantastic "gotcha bitch" moment, I did have to rescue a non-princess girl, the daughter of a townsfolk.  Since kings usually gave about a hundred gold for the safe return of their only child, I could only imagine what a poor turdsfolk would give up.  After a heart-wrenching and tearful reunion between father and daughter, I watched with extreme pessimism as dad reached into his wallet for my reward... I was not disappointed.


I guess he held more sway than I initially thought because he also gave me free passage on any ship sailing within Siam.  Of course, this didn't matter at all to me since I never travel by ship because this game is called Rainbow SilkROAD and anyway, if I really wanted to travel by water, I would have just used the elephants.  The one good thing about all this questing was the interesting boss encounters which always had some dialogue and often eschewed the traditional battle for something fresh, like a quiz about the name of some sage that helped me way back in Arabia.  Of course, if I can't be bothered to remember the names of my warrior companions, I sure as shit ain't remembering some guy I hung out with for a few days all those years ago.  Luckily, the process of elimination served me well.


There'll be more chit-chat and gossip coming up in the upcoming monstage (spoilers: there's a monstage coming up) which will immediately follow this sentence.


Each country generally had one of the four available quests as a side quest and I had been dutifully completing those as well.  However, I had to tap out on Siam's quest involving finding a sea palace.  I knew from a buddha statue that getting caught in a storm would lead me to it, so I booked multiple (free) trips back and forth between cities, waiting for that one fateful tempest to sweep me to untold fortunes.  Storms were fairly common in the area, with around a 20% chance of sailing into one and a 100% chance of sinking because of it.  I was stoked after the first such shipwreck until I discovered that I was still on the Siam mainland, so I kept on sailing and sinking ships like they were going out of style.  After the seventh ship sank to its watery grave and I still wasn't any closer to discovering the sea palace, I just gave up and headed into China.


The first thing I had to deal with in China was lifting a drought curse from a village that was caused by the local trouble-making wizard, Shenlong.  I wasn't too interested in trading anymore since those bastards at the border made me switch out my elephants for crappy horses.  I had a nice lump sum of just under 100K and I figured that would easily take me to endgame, so I focused on questing, which meant that Shenlong and I were due for a meeting of the punchy kind.  Not only was Shenlong a hack in that he plagiarized six of the eight characters in my name, but he also ripped off the Bull Demon King's ripping off of a final boss's true form.


I initially thought that China would be the obvious end to the road of silk but I still had to find a way to Japan in order to defeat the real final boss and not just all these weak-ass imitations.  Normal ships couldn't handle the journey so I had to hire a master shipwright to build one.  Naive me thought that since I had also rescued the emperor himself from a curse that the ship cost would just be written off, but I was dead wrong.


As if that wasn't bad enough, I also needed to hire a particular sea captain, whose going rate is 100K, so that, combined with a 20K compass, came to a grand total of 570,000 golds.  Luckily, I had a gem license which I purchased from some old dude in the mountains for 65K, which was actually a stupid idea because I could have waited until I reached the palace and bought the same license for 5,000 LPs instead.  At any rate, shipping diamonds from Beijing to Chang'an ended up being a very lucrative and relatively short trip, so much so that even after I reached my financial goal, I kept going just to make sure I wouldn't have to trade while in Japan.


With all my wheelings and dealings wrapped up, I prepared for the voyage to Japan in my brand-spanking new ship constructed specifically to cross the ocean by an expert in the field and commanded by a top-of-the-line captain.  So of course it was no surprise that the ship sank just off the coast of Japan.  Not that I was too worried though, I had weathered many such disasters and had always come out completely intact, with absolutely no loss to any wares, hit points, or gold.


So with my mood reaching maximum dourness, I embarked on the final leg of the journey doing another set of quests.  The first such quest was for the princess of China who wanted me to fetch her Divine Robe.  Oh, and by the way completely unarmed non-soldier man, that shit's guarded by an eight-headed dragon beast, so try to at least buy a knife with your no money before you go *tee hee*.  Man, what is it with the princesses in this game and their insane — completely insane — requests.  I considered quitting here because of roleplaying reasons; I wouldn't respond to the princess at all, I'd just silently turn away, walk out of the palace and then straight into the ocean for some sweet, sweet princessless oblivion.  But no, I have to complete each game, not only for my freedom but for dat ending screen.  I did initially try saying no, but of course then I wouldn't be able to advance the plot.


Luckily, there were no random encounters and the dragon cave was close by.  My meta partition knew full well that the fight wouldn't be a standard combat, but my in-character partition was scared as hell to have to face this monstrosity practically naked.  The dragon wasn't in the mood for a scuffle and wanted to get faced instead, resulting in me running back and forth between the cave and a well where the water magically turned into sake.  No less than three times I had to make this encounterless journey, but the reward was well worth it.


The princess was overjoyed to get her dress back and granted me a magic charm as well as access to the armoury in the basement, which had a full set of the best quality gear she had conveniently forgotten about earlier (*tee hee*).  Now the random encounters started back up again and I was able to accumulate even more now-worthless LPs.  The final quest involved tracking down a wizard named Galon who stole all my mirror shards and which led to an epic, if somewhat scripted, battle.  The first fight with Galon resulted in my inevitable death, which was saved by the charm and resurrected me after Galon left.  After some discussion with a couple pals I befriended (I forget their names), I received the Rainbow Sword and took off after Galon again.  This time Galon was unable to use his magic against me due to the sword and so a brutal melee started.


As my HPs crept closer and closer to zero, I was saved after Guy1 and Guy2 entered the skirmish, one attacking Galon while the other fed me healing balms whenever I was "in the red".  This went on for quite some time which created a very cinematic final conflict, but made it feel like the outcome was out of my hands.  After his defeat, the Rainbow Mirror was created and I hopped onto the summoned flying Rainbow Ship which took me to my homeland of Littleland where I defeated the final boss, Xulu, with my Rainbow Sword and which was done entirely through cutscenes.


By this point in the Inconsolable Quest, ending by killing the foozle has become so generic and cliché that it barely even registers anymore.  In Rainbow Silkroad, it feels even more tacked on as it completely abandons the whole merchant angle during Japan.  A more appropriate ending would be either to retire in China after I got all the monies or set it up so that I have to go back along the, now completely opened, Silk Road and do something trading-related along the way.  Less epic to be sure, but for me the Silk Road ends in China (even though it does technically extend to Japan). 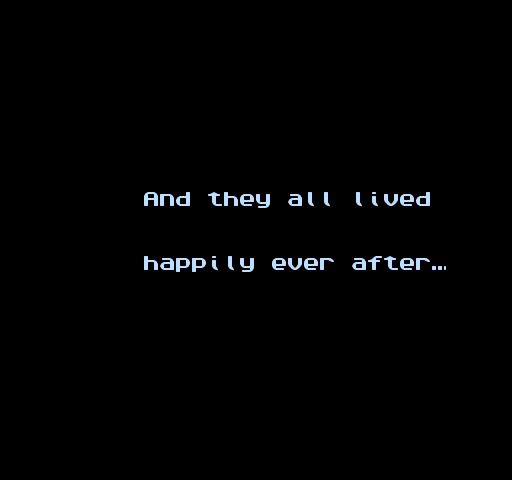