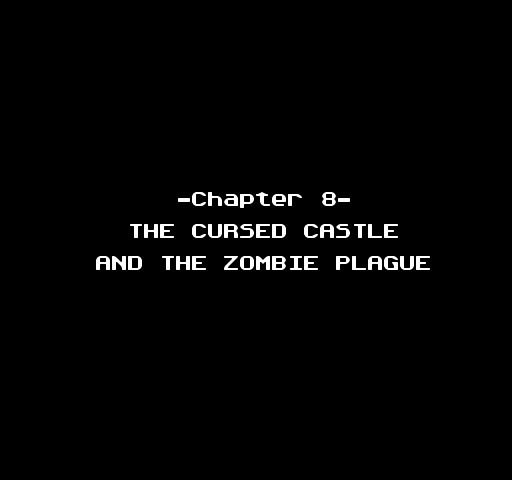 Cursed undead townsfolk is the theme of this chapter and oh how I wish I could join them, maybe as a sweet lich or dracolich.  The random encounters are brutal, with a good chunk of them sporting monsies able to spank off a third of my HP with every swing.  Oh, and you bet there's group-damaging abilities in there as well and no one in the group has an all-party heal.  The best spell we have is my Hospil, which incidentally heals about a third of our max HP, which is just fantastic.  This means that not only do I spend most battles curing the crew, but afterwards everyone generally needs at least one more boost.  It doesn't help that I'm in the very front and probably've got the worst defence but there's no way I'm letting Joey Jojo Junior Shabadoo lead us, no matter how dumb a decision that is!  So this chapter is going like all the others.  Talk to some dude, get the thing, use the thing at the place to get another thing, get the useless intel from Jiro, enter the castle.


Thankfully, this castle has no pit traps, just spikes and creepy giant hands that go up my skirt and grope me.


I'm at about 80% male at this point, so the groping actually gives me hit points back, just like in real life.  Now normally, when I explore a castle, I'll do my best to get into every nook and cranny I can find, in order to git dat loot.  This time, however, I'm just trying to get to the end ASAP cuz I'm sick of having to do multiple trips due to the brutal poundings we've been getting.  I'm also fleeing a lot more than usual to save on precious heals.  All of this, though, doesn't mean we can't stop to pop open a few coffins, although each and every one of them is trapped, which means calling on Jirokichi.


Oh, did I say there were no pit traps?  That was a half-truth.  The final room is a bullshit trial and error path-finding nightmare, though it dumps me at the beginning of the room, not all the way out.


My blood is boiling as I finally approach the boss and am glad that I spent all that time running away as everyone's reserves of AP are appreciably high.  In no time flat, the undead boss is out of commission and we're free to blow up the zombie generator in the next room, freeing the townsfolk from their curse.


Chalk up another Cosmotron and we're off to catch another ferry into the next chapter.  Before that though, I meet the priest from Owari (from way back at the start).  As townsfolk all throughout the journey have told me, the priest has always been one step ahead of us at the next town and we've only just now caught up with him.  He asks for the Cosmotrons and I hand them over without a second thought.  In the next town I meet the real Owari priest, who is rightfully pissed that I've just pooched the whole quest in the blink of an eye.


The imposter that took the Cosmotrons shows up and reveals its true self, which is a flying demon or something.  It literally bombs the life out of the priest, leaving the rest of us unscathed.  The priest tells me that he's been raising an army to fight Dr. Main but they suck without a strong leader so now it's on me to lead them to victory.  I hope it's the final chapter because I'm running out of ways to make fun of Jiro and Jubei.  At any rate, I'll try to make this posting at least seem longer by including another 2 minute monstage. 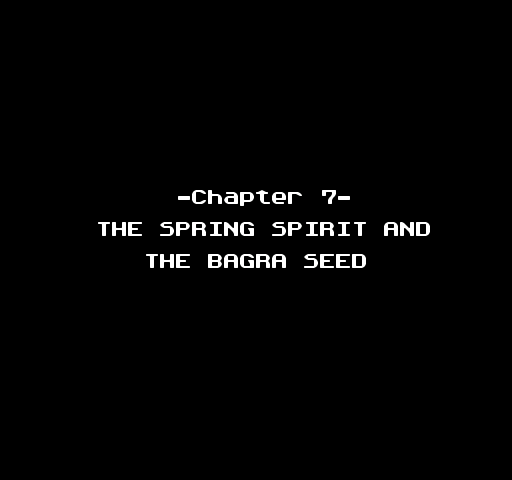 Taking a breather before getting to work on the Cooler is proving to have been a wise move on my part.  There's actually text indicators showing that I'm on the right path while working on it, I was just too dumb to realize it.  This saves me a whole lot of work I was dreading having to do up until now.


Now that no one needs fear ever having to drink a lukewarm beer again, I am fully expecting Penta to come over to the main world and join my posse, which conveniently has one slot available.  Imagine my surprise when we ended up with Rock.  Like Shiro at the end of his quest, Rock has an epiphany and a name change, which I promptly change back to Rock.  I don't even remember what the name is because I didn't write it down.  It doesn't help that our first meeting got off to somewhat of a bumpy start.


Rock is a straight-up melee bruiser with no special abilities other than good stats, but I still put him in the back row with some other guy I've never seen before.  Now it's off to the Ice Castle to defeat Daruma, who has kidnapped and frozen all the spring spirits in order to bring about perpetual winter.  To thaw them out, I bring some Fire Sake, don the goose down parka and solid gold toque, and set off for the frosty Ice Castle, which I'm sure will have its own set of challenges.


Doing a header into a pitfall sees me back at the castle entrance, not just falling a level down, and I'm ashamed to say that it wasn't long before the entrance and I became fast friends.  It's not that getting across each set of two chasms is all that difficult; rushing across as soon as they close is a guaranteed win.  The problem is that often there's an encounter whilst traversing and the nanosecond it takes me to get my bearings after usually results in disaster.  I think if I just stayed still, I'd be fine, but I panic every time and clumsily try to still get across, sometimes even in the wrong direction.  Eventually, a cooler head prevails and I'm defrosting fairies like a boss — at least until I run out of Fire Sake.  Damn there's a lot of these fucking fairies.  Luckily I've been finding sake in chests but I still manage to run out.  Rather than warp back to town and restock, I press ahead and hope to find more.  I'm pretty deep into this castle here; there's no way I want to attempt all those chasms again.  Most of the chests have traps but Jirokichi has around a 90% success rate disarming them.  Even if he fails, the penalty is normally some paltry damage or a fight, though there is one annoying, but rare, trap type.


Usually, even with a 1 in 10 chance to fail, I'm still not giving Jiro the opportunity to act out against me again, but damn, I needs some sake so I risk it.  How does it turn out?  Well, I can't count the exact number of foreskin lashings that Jirokichi is receiving, but suffice it to say, his penis is now effectively a vagina.  I vow never to return to the Ice Castle.  I've got the lion's share of the Cosmotrons; Dr. Main probably can't do shit without 'em.  Unfortunately, the castle dominates my dreams and I know I won't be able to rest easy until I beat Daruma.  I collect more shame as I abuse savestates in order to get across those dang chasms.  I then absolve the shame by rationalizing that the chasms are a realtime event and Inconsolable is all about the turn-based, baby.  In no time flat, I reach Daruma and punish him for having such an irksome castle by siccing Shiro on him.


Daruma can't possibly hope to stand up to the ferocious combo attack by our resident high damage specialists, Shiro and Stanley.  Shiro casts his Double spell on Stan who then employs his 2nd Dan attack, which gives him a second attack.  This sums up to a total of FOUR attacks, allowing Stan (the man) to start slicing shit up like a samurai.  I get the obligatory Cosmotron and head back to town, where I head a rumour about a village to the south cursed with some sort of zombie problem.  I decide immediately to help, as I have plenty of experience in battling the endless hordes of the living undead.