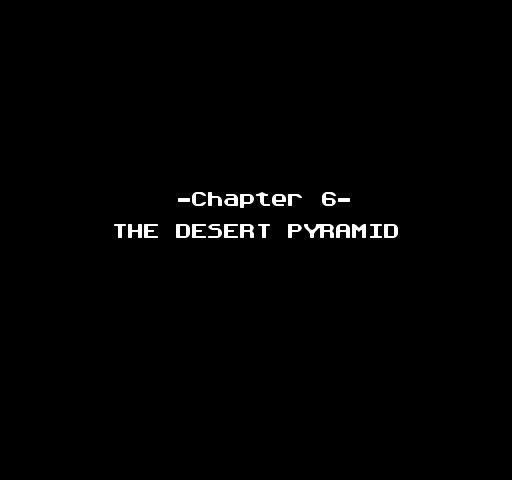 Chapter six starts off with a seemingly insurmountable task — to breach the Great Wall of China.


Local rumour has it that a man named Shisan Buto once travelled beyond the wall and if only I could find his treasure, I'd be able to do the same.  I guessed the treasure to be good ol' TNT, but it ends up being something way better.


The elation Shiro and I feel as the layers of the wall rush past us is near indescribable, hampered only by the realization at the apex of our trajectory that perhaps we didn't quite think this cunning plan all the way through.  Lucky for us, we land in the dumpster of a nearby pillow and cloud factory, so everything's totes fine.  Too bad there's yet another wall cutting me off from the desert where I know another Cosmotron lies in a hidden pyramid.  To navigate said desert, I need to enlist the help of an old pervert named Hidebiro, who used to reside in the pyramid with his harem.  I also find out that there's been an earthquake in the Aurora Kingdom, far to the north, and it has wrecked their most sacred and revered Cooler!  With the fates of hundreds of shindigs hanging in the balance, all thoughts of Cosmotrons are put aside, for Shen is not one to let stop the body-body rock.  I then remember that not only is a semi-impressive wall in my way, I'm also at a desert, so I'm probably nowhere near the arctic.  As luck would have it, Shiro has just found a blue book, which, when read by Other Guy, whisks our perspective to Aurora, specifically to a young penguin named Penta, wearing only a viking helmet and a sly grin.  Young Penta has been charged with fixing the Cooler before all the ice melts and renders an inhospitable terrain somewhat more habitable.  He's given a handful of gold to equip himself and... oh wait, not gold.


While Penta is saving the entire biome, he might as well pull double duty as a delivery boy and take his wedding band to the village of White Bear.  Right now though, the village is cut off by a river that normally isn't there, so Penta'll have to take the long way around.  On the way, he stops by the creatively named Seal Village and picks up a teammate.  Lucky is a cute seal who was sick of the attention she got so she disguised herself as a granny but she still got it anyway.  Or maybe it's the other way around, I'm not really paying attention as my focus is completely on Lucky's considerable assets.


Lucky brings some much needed healing for Penta but the going is tough as neither penguin or seal are particularly equipped for dealing with anything other than fish.  This changes when they pick up their third companion, a rock golem named Rock.


Rock helps tremendously but even his might isn't enough to make the later sets of monsters a breeze or anything.  Many of them have strong party-damaging abilities but thankfully Penta has picked up some healing power of his own.  The boss guarding the defunct Cooler is the golden child of the JB Quest naming think-tank, a metal block called Metal Block.


While Metal Block wasn't too difficult of a challenge, fixing the Cooler is another matter entirely.  No member of the party has completed their apprenticeship in Cooler repairs, so the survival of their civilization hinges on good ol' trial and error.


Penta tries a bunch of random combinations but nothing seems to happen.  Instead of beginning a procedural sequencing of possibilities, Penta pouts and we're suddenly back to Shen Quest, still looking for a way past that second wall.  Ugh, I hate to do it but I guess it's time to call on Jirokichi, who spies up a super useful piece of intel.  He suggests that we simply explode the wall but he provides no details as to where to any explosives may be located.


To his credit, JK does make one of his patented sweet fortress posters, so I'm letting him off light with only twenty foreskin lashes.  The poster also reveals that the pyramid has been refurbished from a harem to a factory that makes humans into food.


I think the daily foreskin lashings are starting to take their toll on Jirokichi, as he's starting to act out in a most passive-aggressive manner.  I had just sent him out to spy, even though we were at a hermit's hut and not a place of, you know, population.  He responded to this slap in the face by donning a ridiculous outfit and then straight-facing his routine non-information.


Despite JK's unefforts, I'm doing well enough on my own.  I've found the "Gain Burst" explosives as well as Hidebiro, whose youth I restore with bingbing essence so that he can make the trek across the desert.  The explosives are super effective, not content to just destroy one section but all several kilometres of it.  Hidebiro's youthful vigour coupled with his perverted old man mindset is becoming unsettling as he details what he's going to do with his harem.  I mean, I'm no prude, I like to get my freak on as many times as humanly possible, but this guy takes it to a whole new level.  More than once, I've caught him staring off towards the horizon after trailing off during one of his raunchy stories, mouth hanging open and drool dripping off his chin.  Once we find the pyramid, Hidebiro practically vaults off his erection into it and he's gone before any of us can even say "Eww."  I hope libido is enough to get Hidebiro through these monsters cuz these are some tough fights.  There's also pit traps which I absolutely suck at avoiding, extending each trip far more than it should.  Eventually though, I find the main factory and can't help but be a little impressed by the operation.


Smashing the miniboss, a stack of large cans called Big Can, I shut down production, pausing only briefly to consider if I should call Jirokichi for one last time, if you catch my drift.  I decide against it, figuring there's probably some downside that I can't think of.  The boss of the pyramid, King Tutan, seems pretty tough as he has some very hurty special abilities.


Tutan's demise brings Hidebiro out of hiding and he vows to not only restore, but improve, his harem, making it more perverse than ever before!  Have fun with all that, Hide, because as chapter six closes, I just know that I'll be spending the beginning of chapter seven grinding through all the possible combinations for the Cooler.
Uploaded by Shen Nung at 10:32