Wow, did I ever spend way too much time breeding demons, but an unforeseen, lucrative side business involving videos of demons "going wild" kept me quite busy.  I had multiple instances where I needed to go back to the earliest stages just to get creatures weak enough to breed the basic elemental slimes.  Slimes are the catalyst that allow a high level creature, which cannot be bred any tougher, to push beyond that limit and go Super Saiyan.


In addition to this, there were times I needed to breed a specific kind of non-slime element in order to unlock a barrier.  All of this meant I spent a lot of time running around, trying to find creatures that were not only of the same type (for elemental fusion), but an appropriate power level as well (end result is an average of the original two).  I thought the demon limit of ten was quite generous, especially after getting upgraded from seven midgame.  Four spots were devoted to the demons in the current party which left a roomy six in which to play.  The crunch began when I started wanting to keep more than four demons, due to their difficult creation path.  Even though it appeared that they couldn't evolve any further, I never knew if I just hadn't found that one correct element.


Wasting even more time, I got it in my head to try to create a demonic party based on a theme.  First I wanted to make an all-dragon team but was only ever able to make two.  After getting Odin, I started having delusions of a super all-star team consisting entirely of deities, but, again, I only ever got two.


Okay, enough demonic eye candy; let's back it up a bit here.  After finishing the picnic, I used my infallible perceptive and investigative skills to correctly deduce that I just had to run around the statue again to get off the island.  From there, Gumdrop and I went about exploring a new area and talking with some of the residents, though it didn't always go so well.


We did learn that Pazuzu is currently in a power struggle over the control of Tokyo with another demon named Bael.  It wasn't hard to figure out that Pazuzu just wanted us to eliminate his rival for him and had made up the whole story about Gob and I being messiahs.  I suspected Pazuzu right from day one, so I opted to try to find him and call him on his bullshit.  Getting to him was an uphill battle, as we had to encounter some of the darkest nightmares plucked right from the depths of our souls.


Far worse that those vile beings were the heavy rockers who would always appear in large groups, each individual having the ability to put multiple characters to sleep.


Although they don't do too much damage, it was infuriating to just sit there, round after round, getting pounded on by greasy headbangers.  My solution to this problem was to have two demons with the ability to roar and stun the entire motley crew (who seemed particularly susceptible to it).  I went with two demons because they only roar when they feel like it (I can only order them to cast spells, not use innate abilities).  This changed the dynamics of the battles from me yelling at the rockers to yelling at my dumbass demons when they decided not to roar for multiple rounds.  At any rate, the line change enabled us to penetrate all the way to Pazuzu, where we found Gob guarding him like the chump that he is, going on about being the one true Messiah.


In true Gob fashion, he made a huge mistake by attacking all six of us by himself.  After rending him unconscious almost immediately, we carried on to confront Pazuzu, who was still pathetically trying to keep his flimsy cover story afloat.  He even had the audacity to strip me of the title which I never cared to have in the first place.


No surprise, Pazuzu also was unable to defend himself against six assailants and fell rather quickly.  I must have been in a surly mood because the option arose to straight up decapitate Pazuzu and lug his head around, just for kicks.  I thought perhaps Gob's head would also look nice up on my mantle, but he was already gone.  With Pazuzu's death, the power struggle for Tokyo would now be over and Bael could rule over the city entirely.  At least, that's what would have happened if I hadn't got a little slice of that power and decided that I wanted the whole pie.  I guess Gob had the same idea because I found him getting smashed to a pulp by Bael.


I don't blame Bael for thinking that I'd be as easy to beat as Gob, but, on the other hand, there are six of us.  Are the demons that I travel with just so beneath the notice of the boss demons that they don't even register as a threat?  Come to think of it, bosses never address any of the other demons before a fight; they're treated like they don't even exist.  Burn, no wonder demons are always pissed off and shit.  After defeating Bael, he turned into a frog which I could either crush or capture.  I elected for the latter as I couldn't bring myself to destroy the creature who had recently brought me so much happiness.  Now was the time I needed to find seven pillars in order to open a gateway to hell and — bad news — I had four.  An earlier set of MacGuffins based of the four elements had led me to believe that the pillars would also come in a similarly numbered set.  This meant a lot of backtracking and trying to trigger events.  This took awhile as I, once again in my eternal wisdom, neglected to make any maps, not even the lazy screenshot method I used during the first.  Eventually, I gathered the pillars and planted them in the center of Ground Zero, where the first nuke hit Tokyo during the Great Cataclysm decades ago.  Doing so opened up a portal into the demon world, where I was to hunt down Lucifer, lord of the demons, and put an end to the stream of demons invading the earthly realm.


Here is where I spent the bulk of my time experimenting with demons as previously stated.  I would only push forward into a new area after getting bored with the current batch of recruitable demons.  Two notable events happened whilst I goofed around in hell.  The first was Gumdrop being abducted right from under my nose, leaving me without a renewable source of healing and warping (and love).  Some of my demons had healing spells, but they function at such a weak level that they're almost useless.  So I had to rely on my limited stash of items while I scoured the castle where she was held.  After having a relatively easy time so far in hell, this quest was intense; if I didn't find her on the first attempt, I'm not sure I would have had enough precious healing Jewels (which cannot be bought) to do a second run.  Thankfully, I had brought my 'A' game and soon enough Gummy was back in my arms with me whispering into her beautiful ears how much I missed her.


The second major event happened when I came across the demon boss Beelzebub and was fully expecting yet another combat to occur.  Suddenly, still in his captive frog form, Bael lept towards Beelzebub and requested my permission for them join together, as they had been sundered by The One True God.  After telling them to doowhutchyalike, they merged together and became Baal and joined my ranks.


I didn't utilize Baal all that much since Gumdrop would always give me the ol' stink eye whenever I summoned her.  Regardless, I kept Baal safely in the confines of my computer deck, just in case Gumdrop should ever get captured again (oww! I just got slapped!).  Eventually, I got around to doing what I was suppose to and confronted Lucifer.  Due to having Baal with me, I got slapped with another surprise; Lucifer wanted us to join forces and take on The One True God.  Luc gave a very convincing speech and I found myself giving into temptation.


Lucifer owned those six wings so hard that I became an immediate fan.  Sorry, Michael, but some demons can pull off having six wings and some can't.  With Lucifer's help, getting to The One True God was easy enough, although we had to get by his bodyguard first and you'll never guess who it is.  Go on... guess.  It's the absolute last person you'd think it would be.


Normally, I'd scream continuity error, but this game is from Japan, so I understand that they were just ripping their source material from another culture's mythology and perhaps didn't have the keenest eye for details.  Plus, I absolutely adore Satan's smaller head on top of his regular head.  Oh, the conversations they must have! (screenplay in progress)  After reaching The One True God, he did the predictable thing and tried to bribe us with a kingdom or some shit.  Not only did I count exactly zero wings on this guy, he's just some floating bald head — colour me unimpressed.


Lord put up a good fight but even the being that created the whole universe by mere force of will couldn't handle six dudes.  After his defeat, he bragged about being just a fraction of the essence that controls the entire multiverse and that he'd manifest again sometime soon and return to be a big jerk.  Lucifer did me a solid and returned to his world, taking all the demons with him.  Peace returned to the world — but — for how long?... oh yeah, until the big giant head comes back. 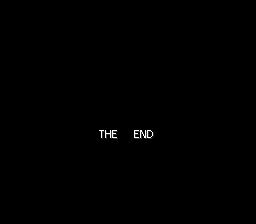