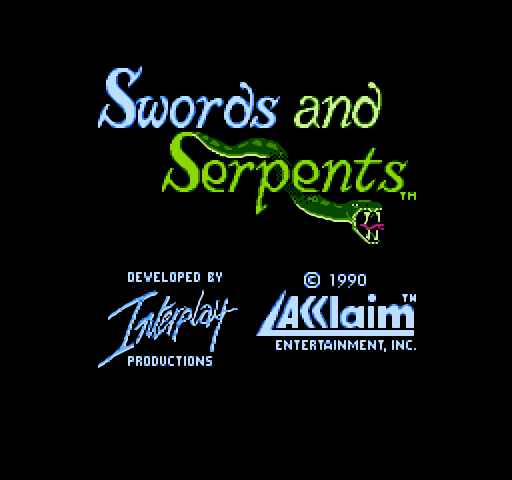 Here's a blast from the past from a game that I never owned but rented extensively.  The password system it utilizes was perfect for multiple weekend adventures, as I wouldn't have to worry about losing any progress (there was always the fear that someone would rent during the week and erase my savefile on those dang battery carts).  I'm not sure if I ever finished it, but I do recall many things about the first few levels, especially the music.  It's light on story — enter the dungeon of the dreaded Serpent, find a bunch of ruby items, and kill said Serpent.  It's light on everything else as well; three character classes (warrior, thief, magician) and three attributes (strength, intelligence, agility) are as deep as the chars are going to get.  There are four party slots available and no restrictions on the config; I'm going with two magicians, a warrior, and a thief.  I was going to ditch the thief due to remembering that there aren't any traps (at least none that require a thief to disarm) in S&S and also because I'm still pissed about how crappy the thief in Might & Magic was.  A cooler CPU prevailed, however, and rightfully so; the thief is pretty much a slightly weaker version of the warrior except that he gets the occasional instakill.  After getting my posse together, we soon ran into the first of many old men who dwell within the labyrinth.


All the geezers are completely senile and rarely give out any advice that isn't self-evident.  The only useful bits of advice are found scrawled on the walls in various places — I wonder if these were written by the same men before the unrelenting march of time ravaged their poor minds.


Although S&S is nice enough to allocate a portion of its real estate to an automapper, one will still want to make their own maps as well.  The automapper has a fading memory and if the party should wander more than two levels away, the slate will be wiped clean.  I can understand not encoding explored areas into the password (that would be a nightmare), but it still does it during a single session.  Whether it's due to memory issues or just a design choice, it doesn't matter as I was going to make my own maps anyway.  The manual actually gives blank maps for all sixteen levels which is nice but I always used (and still use) graph paper because what else am I going to do with all this graph paper?  So far, mapping has been pretty easy but I'm sure that'll change once I hit the lower levels.


Combat in Swords & Serpents is fairly unique and it really stuck out in my acne-riddled mind back in tha day.  Instead of button-mashing attacks, the player can actually aim at the head, torso, or legs by pressing the appropriate direction on the D-pad.  Creatures have location vulnerabilities that can be exploited by experimentation and observation during battles.  It's a simple little system and it works wonderfully; I'm always glad to have a reason to pay more attention in fights.  It's great that they tried to make the combat more realistic, but in doing so, they left open a huge weak point that was immediately figured out, and then abused, by teenaged Shen.

Okay, so maybe that's just in my imagination (but just maybe).  Anyway, while combat is turn-based, it doesn't really come off as such.  If the party members have a string of successive attacks, they can be executed quite swiftly.  The turn system itself is atypical; it's not a case of one side going, then the other.  It seems to be based more off stats and/or levels to determine if you get an opportunity to attack.  For example, when first starting off, each combatant got their fair share of attacks, but after the party gained a couple levels, we were getting many hits in on that same set of monsters before they could even react.  Not just a few either; at one point, we were getting over twelve strikes in before the enemies could even cover their gonads.  It's not a case of them just missing us either, as the game shows whether they hit or miss.  It's an odd system, not only in its execution but in that it heavily favours the player (unlike most dungeon crawlers).  As one who generally enjoys things more on the challenging side, it's still strangely thrilling to watch the enemy life bars get whittled down before they even manage to bust off three frames of animation.  Due to this, we gained levels and equipment easily and soon were wallowing in our own narcissism.  We all had excellent stats to start with (reroll king over here), which was good as gaining a level only gives a single point boost (usually to the class's prime attribute).  As one of the two magicians in the party, I started off smarter than Magnu but she soon was not only more intelligent, but had more MP and HP to boot.  It became apparent that she was the darling of the group, as Draco and Mouser went to her for the vast majority of their healing needs.  I was delegated to the casting of utility spells such as Shield and Flight.  I'm not going to say my feelings were hurt, but I totally gave myself all the best magely items, resulting in me having more than double the AC of stupid Magnu.


We're at the halfway point and just under 10 hours in, so it looks like this one won't be near as long as Might & Magic.  Undoubtedly the mapping will get a little more tricksy from here on in, but given the "lightness" of the game, I'm sure that it will be comfortably manageable.
Uploaded by Shen Nung at 09:14